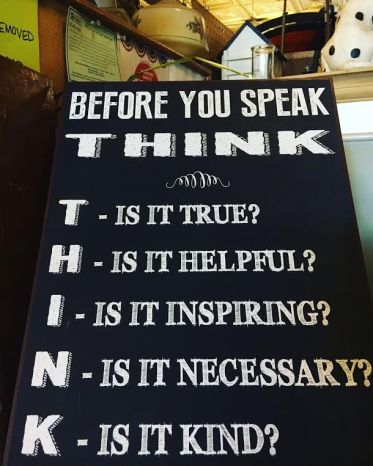 I was taking the long way back to the office today from lunch when I came across this chalkboard sign at an antique store that gave me pause.

Before you speak, THINK:

H – Is it HELPFUL

I – Is it INSPIRING

N – Is it NECESSARY

If I’d made this sign, I’d have also added, before you write, THINK — but the message is all the same.

Thinking before speaking and writing is a lost art these days. It’s as though we’ve forgotten to filter ourselves because we believe it’s our “right” to speak our minds, even if it means hurting someone else in the process.

Collectively, we’ve lost our kindness compass. Instead of exuding empathy and listening to one another to perhaps gain new perspective, we settle for discord and animosity, and in this nasty political climate, the ugliest of America has come out in full swing. All you need to do is spend two minutes scrolling the comments section on any social media platform and you’ll see the insults, the hatred, the vitriol, and the disrespect with your own eyes — on both sides of the aisle.

And this lack of kindness and compassion transcends politics; it’s everywhere …

Just read comments about the tragic shooting of Harambe at the Cincinnati Zoo and it’s hard to believe there was ever a time when people adhered to the saying, “If you don’t have anything nice to say, don’t say anything at all.

Some called the child’s mother such awful names, I won’t print them here — and accused her of being an irresponsible, negligent parent. To them, I say, have you ever been around a toddler? They are FAST. And even the most diligent parent has made the mistake of looking away a moment too long — but usually the result of that is a minor bruise or bump — not their child being thrashed around by a 400-lb gorilla. This mother will relive that agonizing ten minutes her child spent with a gorilla — as well as live with the guilt for said gorilla’s death — for the rest of her life. But hurtling insults at this woman can’t bring Harambe back.

Others blamed the zoo for acting inappropriately, or being too quick to shoot. To them, I say, the zoo has expressed countless times that, given the situation, tranquilizing Haramabe could have upset him more, leading him to be more agitated and hurt–or possibly kill — the child. Though I am saddened that this beautiful, young gorilla lost his life and certainly don’t condone violence of any kind — if it were my child in the arms of a primate, you can bet your bottom dollar I’d want the zoo to respond similarly. They did the best they could under the circumstances, as they are trained to do. Calling the zoo authorities horrible names can’t bring Harambe back.

And others said we shouldn’t; have zoos, period. To them, I say, OK … you’re probably right; animals don’t belong in captivity. But since we do have zoos and aquariums, let’s focus on ways to protect these beautiful creatures, as well as the eager visitors who come to learn about animals they would never otherwise have an opportunity to see. Hating on zoos can’t bring Harambe back.
Perhaps if we all agreed to T-H-I-N-K before speaking or writing, we’d live in a world that is far less judgmental and significantly more compassionate. This world would be healthier and happier, and maybe we’d realize we have more in common than we think: we’re all human, after all. And we all make mistakes.