From where I stood, my heart was in my mouth.

We were at the Big Kid playground at the elementary school where Maya will be starting kindergarten this coming fall. This playground is intended for kids ages 5-12, and sometimes we venture over there from the Little Kid playground so she can test her climbing skillz, while Ben typically just chases her up the smaller of the slides.

But not yesterday. No … yesterday he was on a mission to match his sister’s bravery and give me a coronary x 2.

I had begged him not to climb any higher, that he was too little for this super-high, curved yellow ladder. But in either sheer defiance or a surge of toddler bravado, he sought to prove me wrong. 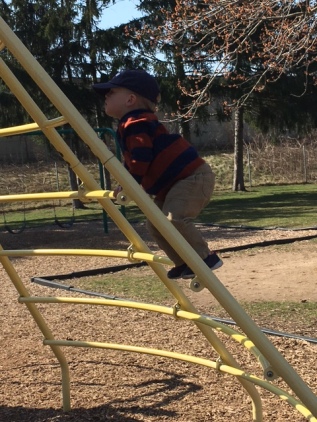 I watched with bated breath as the little blue sneakers inched up the ladder. Tiny toes teetering just over the top of each rung — too close for comfort.

I knew if he climbed  up one more step — like he was about to do; I could see the fierce determination in his eyes — I wouldn’t be able to reach him as he fell.

A myriad of terrible visions darted around my mind a furious swirl: broken bones if I couldn’t catch his fall, bloody chin if he smacked it on the way down, bruises galore from slipping. Recognizing we’d walked here — me pulling them in their red wagon —  it wasn’t like I had a getaway car on hand, and Luis was out of the country … so I was screwed.

I quickly devised an emergency escape plan in my head but before I could finish the plan, I could hear my girl cheering on her baby brother.

She was at the top of the slide, reaching out, beckoning him to keep going. “Come on, Benny! I’ve got you! You can do it!” 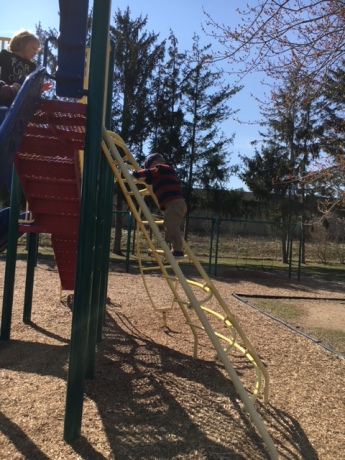 While it’s super-sweet that she was being so encouraging (this isn’t always the norm) her egging him on was encouraging him to take the next three steps up to “no-man’s land” — an area I couldn’t reach and couldn’t brace a potential fall — an area with a huge open space.

In that instant, it became abundantly clear that he is his own little person now with a [stubborn!] mind of his own.

As his mama, I can fear for his life — but he isn’t fearing for his own yet. And the mere fact that he is so fearless is pretty much what’s terrifying me.

The sweet innocence of childhood — of testing limits, of breaking boundaries, of bending rules to suit his needs … it’s all part of growing up.  And while we as parents may struggle with knowing when to step in to stop a potential disaster and when to let a child be a child — which, yes, may include falling, getting hurt, or shaking their confidence — it’s all part of parenting.

Sometimes we have to let go, and let be — even if we do it through gritted teeth, bated breath, and while holding back tears.

But it has to be done; it’s all part of the experience.

Which brings us back to the playground.

Since my little daredevil was past the point of no return, I did what any mom in my position would do: raced under where he was standing, shoved my phone in my pocket, sucked in my breath and PRAYED to the high heavens that he’d make a solid landing.

And guess what? With his sister’s nod of encouragement, he made that solid landing. I let out the world’s biggest sigh of relief.

As he crossed the ledge to where she was waiting, he was grinning ear-to-ear. “See, Mommy?”

I hadn’t doubted him or his abilities — at least, not totally.

But I’d be lying if I said I didn’t question my own parenting — allowing my two-year old to climb up a really tall, really scary structure!

This time, we were lucky — no one got hurt. And I fully acknowledge it could have been a very different outcome, had he fallen.

But in the end, we both learned something: I learned to let go a little … and he learned to trust himself each step of the way.

How about you? How do you handle daredevil moments with your kids? Do you go with it, or try to avoid them at all costs?

There was an error retrieving images from Instagram. An attempt will be remade in a few minutes.