Ben turned one a month ago and I had fully intended to begin to pull the bottle plug at the one-year mark, as we did with Maya. With her, it was a slow transition to the sippy cup that probably started a tad too late. I ended up ditching the paci first because that had been her crutch, and then working on the sippy cup transition once she had that down. The whole transition took about six weeks and it was not easy; in retrospect I probably should have just cut her off cold turkey from her bottles, too.

Oh well, no harm, no foul: lesson learned for baby #2!

Ben never really took to his pacifier … and by the time he came along, our pediatrician was now recommending water in a sippy from six months on — and so he was acclimated  to it somewhat. He didn’t have a problem drinking water, and when I introduced milk at dinner over the past two months, he would take a couple sips before whacking it to the floor in true baby fashion. I didn’t think the change would be as dramatic for him as it was Maya — even though I was going with a cold turkey approach to weaning, and I was right — but we had a bit of a set-back earlier this month.

We had a little bit of formula left at his one-year check-up and had planned to finish it off and just move exclusively to the sippy cup — but he got sick with an ear infection and some other virus. I asked if we should still move forward with the cold turkey wean we’d been planning or just wait and our pediatrician said he was more concerned about Ben staying hydrated and recommended not making the switch til he was better. So we bought another canister of formula and vowed that this would be it … and it was.

Yesterday was Ben’s last day with bottles. Today he was bottle-free — and it was hard. In addition to it being the end of daylight savings time (meaning children all over the U.S. were thrown off anyway) he was really whiny, cutting a tooth. He didn’t drink nearly close to what he normally would have from bottles, but did eat more table food — and continued  to sign for milk, so all in all, it wasn’t easy, but it wasn’t as terrible as it could have been.

Yet as when I finished nursing both kids (at nine and eight months), there was a certain bittersweet sentiment in the air. He is still so small and needy …  And so in a way it feels cruel to cut him off of his “life support” … though rationally I know between 12-15 months is supposed to be optimal time to wean from the bottle… and the longer I prolong it, the harder it will get. Rationally I know that, but as a mom, it’s still hard.

It was a bit tough last night giving him his last bottle … and I just have to remember: we still have our evening snuggles and rocking sessions to look forward to each night, and his body still curled up the same on my chest, head laying on my shoulder, the same as always. The only difference is, no bottle. Because we are not going back.

I think the other factor weighing in is the likelihood that I’m hesitant to talk about – that he’s our last baby … and, as a result, when we  pack up these bottles, it’ll (most likely) be for good. And that finality is pretty tough to swallow (yet not so tough that we are leaning towards #3!).

So while I wax nostalgic about baby weaning and our last baby… here are some legit reasons to  be HAPPY we’re done with bottles:

2) No more nasty formula — the smell, the mess.

3) Will save money that we aren’t spending on formula.

4) No more bottles to pack for school.

5) Traveling is now a cinch: I can get milk anywhere, any time.

So here it is … Benny’s last daytime bottle yesterday. He looks so tiny and cute … 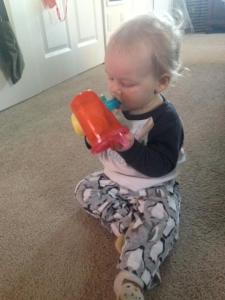 I know it won’t be easy and we will hit struggles along the way, but all things considered, I’m proud of how he handled today. It was probably harder on mama than baby, anyway 😉