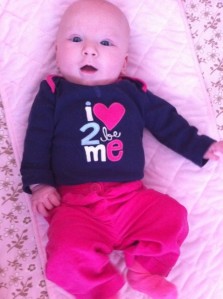 I’ve always admired my younger sister’s confidence.  When she walks into a room, the girl owns it. She’s not cocky; I think she just knows who she is and really digs that person. It’s something I find enviable.

And so when she – the best auntie ever! – bought Maya an adorable onesie that read “I (heart) 2 B Me” I couldn’t help but smile.

Though I’ve never really verbalized it anywhere but here on the blog, instilling self-confidence in my daughter from an early age is something I am striving for.

All my life, I was told by my parents how smart, pretty, sweet, funny I was. The problem was I didn’t always believe it.

And though I was no wallflower and always had tons of friends, I truly believe that lack of confidence really damaged me and held me back from being the best “me” I could be — particularly in my grade-school years.

There were times I’d shy away from joining a team because I feared I wasn’t good enough, or would feel uncomfortable going up to a group of people who I wasn’t super-close with, or when I wouldn’t speak up in class because I worried what other people would think if I got the wrong answer. 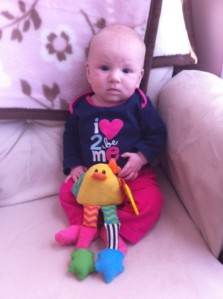 I also often worried I wasn’t smart enough — mostly because I never tested well on state-mandated achievement tests and, naturally, that’s how we were grouped into certain classes. So though I had great grades, I was not put in accelerated classes until 6th grade, when my teachers finally gave me the push I needed (testing aside). I flourished, taking mostly honors and AP classes throughout high school … but I often wondered if I was really as smart as the other kids.

Equally challenging was my physical appearance — I had unruly, curly auburn hair that it took me well into high school to really learn how to “tame” (as my friends and I used to tease about it) and though I was never fat, I was also never thin … and all my friends were, which made me not so confident when it came to boys. I had countless hopeless crushes and got used to being everybody’s good good friend … and no one’s girlfriend.

I don’t share all of this to sound like a sob story. I did make progress on the self-esteem front later in life. My first boyfriend at 16 turned out to be the boy I dated long into freshman year of college, which led to greater confidence in terms of my physical appearance and dating. I was a Varsity cheerleader from sophomore year of high school on (competing and performing in front of huge audiences) and a volunteer cheerleading coach — which instilled in me discipline and a confidence in my craft, if you will. And in college, I joined my sorority (Chi Omega — HOOT HOOT!), held internships at some of the coolest places in Washington, DC, and studied abroad in Argentina — giving way to the opportunity to travel and meet one of my life’s dreams: going to Machu Picchu.

All of this before meeting my now-husband, going to grad school, launching my career in public relations, getting married and having a baby.

All of which brings me to the point of this post: Maya’s little onesie speaks volumes and reflects exactly what I want her to feel about herself now, at three months, and forever more.

I want her to be, in the words of the great Carla (aka MizFit) “unapologetically me.” I want her to love herself for who she is, and to believe in herself the way I do –and always will — believe in her. Equally important, I don’t want to pass along my own hang-ups on to her. Instead, I want her to have my sister’s confidence and self-assurance.

The question is, how? Leading by example is one way to do it, but I think it’s going to be something that, throughout her life, will need finessing. Girls today receive so many mixed messages. If a girl comes across as confident, she’s often called a bitch. But if she lacks self-esteem, she’s a push-over. So it’s going to be a delicate balance and the way I see it, the earlier we start the better!

How about you? How did you instill confidence in your children and, more specifically, daughters? Did you struggle with not transferring your own self-esteem issues to your children?

One thought on “The Onesie That Says it All”