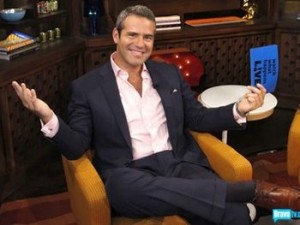 I don’t know about you, but I am ridiculously, madly in love with Andy Cohen of Bravo TV fame.

I don’t care that he doesn’t dig women or that I’m married to the love of my life and going to have a baby in a few weeks. He is hysterical and his “Here’s What” segment on Watch What Happens Live is quite possibly one of my favorite things on TV (next to Modern Family, of course!).

Andy is, as my college friends would say, an “N.J.B.” — a “nice, Jewish boy” for those unfamiliar with the term. (Even my “shiksa” friends in college grew to use the term!) And I just can’t get enough.

Throughout my pregnancy, aside from the testing issues, I’ve felt wonderful. No morning sickness, no swelling, just a little heart-burn and back-aches. And I haven’t had a ton of cravings or aversions — at least not like what I had envisioned I’d be feeling … in fact, until recently, I could easily count each of them on my one hand.

Aversions: oatmeal (which I got over in the second trimester); peanut butter (ditto);  yogurt (ditto); raw chicken (that still gives me the creeps); apples (that lasted for a week or two in the beginning); veggies (ditto).

But in the words of Andy, “Here’s what…” I’ve been craving as of late: CHEESE-STUFFED PASTA DISHES and FRENCH DIP SANDWICHES.

Everywhere we go, I have to have one of them on the menu. I just end up eating half the portion now and save the other half for later. That way I get my fix and still have leftovers for the next day (or later if I’m ravenous). Believe me, there’s strategy at play here.

And here’s a word to the wise: don’t come between a 7-mth pregnant woman and her cravings, however odd they may sound!

How about you? What ‘s your “Here’s what” of the week? What are you obsessed with as of late? (person, food,workout, etc)