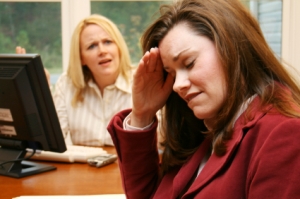 In high school I was a Varsity cheerleader (more on that here).

Each year we got our nicknames printed on our pep-rally T-shirts and added the acronym “TCW” to the sleeve.

Since we’d never divulge what it meant, everyone at school knew was an inside joke for our squad and ideas began to fly about what it meant.

Our classmates assumed it was something sordid and racy … but in actuality, it was anything but.

Now that it’s been 13 years since my last cheerleading competition or football game, I figure I’m at liberty to tell what it meant: Takes Criticism Well.

We chose this acronym because it really was symbolic of our team: we were a group of women (and later a man when, senior year, a guy joined our squad) who learned to take criticism well.

From each other, and from our coach — who was hard as nails and a “pusher” (remember Ms. Norberry in Mean Girls?) ; someone who wanted you to be more than you even knew you could be. She saw potential and wouldn’t settle for less than the best.

And she would always remind us to “suck it up.”

If we fell while stunting, we’d hear “Suck it up, ladies.”

If we felt like we just couldn’t run another mile or lift another set of weights that day, “Suck it up, ladies.”

If we lost a big competition, “Suck it up, ladies.”

And so it’d go … we’d spend countless practice sessions being (constructively) criticized by our coach and each other as a mechanism for improvement. And it did make us a stronger team and gave us tougher skin.

So we added “TCW” to our shirts to remind us that we, collectively, “Take Criticism Well.”

I’ve tried to carry that mantra with me through my life and sometimes it’s come in handy, but the truth is, I don’t take criticism well.

I tend to take things very personally — and I always have.

I don’t like this about me — it makes me very vulnerable and makes me feel like a wimp when I let things get my goat. When I get hung up on the little things.

If someone tells me they don’t like  something that I do, I tend to quit it cold turkey, going from one extreme to the other.

Well, that’s not necessarily the best approach! It’s a rash approach … and not likely to improve the situation at hand. Perhaps a middle-ground solution might suffice, for example. But I tend to lash out and go in one direction or the other.

When I’m wrong, I’m the first to admit it (well, after some internal dialogue, that is!) … but sometimes things are less clear and we still need to own up to them … and that’s where I have trouble.

Which brings me to today.

Today at work I screwed up. I know it happens to everyone; people screw up. I just hate screwing up.

It was one of those things where no one was really to blame … but I had to accept responsibility because, well, I did.

Anyway, I got a little bit of a wrist-slap, and I have to say, it hurt. I don’t like being told I’m in the wrong, especially when I wasn’t entirely in the wrong.

Mostly it upset me because I’m super-sensitive to begin with … and need to develop a thicker skin. But it really got to me because my performance at work is very important to me. While it’s unrealistic to expect this, deep down, I want to do a great job ALL the time.

And I like knowing when I’m doing a good job and (like anyone) enjoy hearing praise; it gives me a sense of validation.

And I’m open to hearing about how I can improve — I take good stock in what my supervisors say and the advice they give — everyone has room for growth, and I appreciate it.

But when it comes to doing something wrong — and being chastised for it — that is harder for me to grasp, and something I need to get better at.

I’m sure it has to do with my perfectionist tendencies … and might be a female thing, too. When I shared with my male co-worker what happened, he told me not to worry about it — same thing with my husband.

(Speaking of … why do men let these things roll off their backs so easily, while we women tend to dwell/fixate? Or maybe I’m generalizing too much here?)

Anyway, it was not looking to be a great end to my work-day, so I tried to remember something from my sorority days where we’d always try to end a day/meeting/etc. on a high note, with a “pro.”

For kicks, I figured I’d end with three –since the bulk of my work-day was good.

1) A Flower Fairy at work delivered daffodils to my desk.

2) I went for a beautiful walk at lunch with my girlfriends and we saw half the office out and about, which was funny.

3) I ate well and will work out tonight; no stress-eating or anything.

Ultimately, there was a lesson to be learned from this incident and I’m going to keep that in mind going forward.

And the other lesson – the even bigger lesson — is that I need to work on my reaction to things … because our reactions matter almost as much as the incident itself, in terms of how we handle challenges.

Seething or dwelling solve nothing except create more inner turmoil. And that’s not a way to live …

How about you? Do you take criticism well? Do you think it’s a girl-thing?