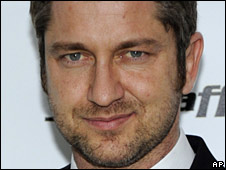 In this blog post, Gawker contends actor Gerard Butler’s belly will be the end to Hollywood’s beauty double standard.

I’m not so sure, but I hope we’re making some headway here toward ending the double standard.

Per Gawker,“Paparazzi pictures of 300 stud Gerard Butler looking all fat in Barbados have everyone in a tizzy. Finally it seems male celebrities will be held to the same impossible body standards as their female counterparts. Thank God.”

To be honest, I don’t like that they called Butler “all fat” … but it’s pretty obvious that he’s no longer sporting those 6-pack abs of his 300 days … And frankly, I disagree a little with Gawker’s post in that I’m not so sure he needs to be all chiseled all the time.

Let’s be real. He was playing a character in that role; his body was an asset and part of his character. Maybe Gerard, like many people in the spotlight, didn’t feel the need to spend his life in the gym or dieting and yea, he let himself go a little. Is it a crime? For a man or a woman?

(The gossip rags and blogs sure think it is, but can you imagine if it was you on one of those covers? Oy!)

That said, we all know men have long been given a free pass when it comes to their physiques, whereas women have notoriously been pummeled in the mainstream media and blogosphere for theirs … and so, in some sick, twisted way, it’s a breath of fresh air to see a man under the same scrutiny … I’m just not sure it solves anything for us as a society.

This type of chatter (now directed towards a man) only highlights our culture’s obsession with beauty, thinness, and ideals of “perfection.”

How about you? What do you think — should men be held to these same ideals, or are we just expecting too much of both sexes?

4 thoughts on “An End to Hollywood’s Double Standard?”