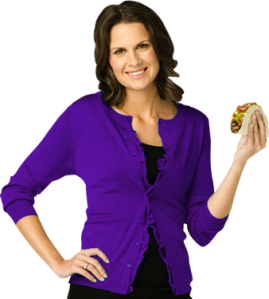 While I fully support companies offering healthier fare– and even promoting it as healthier fare — I agree with Roni and Steph that this Taco Bell’s Drive-Thru “Diet” is a load of CRAP. Even calling it a “diet” just kills me!

First of all, promoting fast food as a way to successfully lose weight is ridiculous. (Did anyone else see Supersize Me?! Of course he wasn’t trying to lose weight but look at the destruction he caused his body!)

There is simply nothing healthy about eating fast food all the time, period. Maybe it’s fine once in a while, but encouraging anyone to consider eating it regularly is just insane.

Second, who can really stomach Taco Bell all the time? (I think the last time I had Taco Bell I was in college!! UGH, nasty stuff!)

Third, c’mon, Taco Bell … even Jared varied up his Subway subs and now look at him — he’s gained weight and the paparazzi have been all over him for it! Why? Because any exclusive “diet” like that is simply not sustainable in the long term. Poor guy …

That said, we know this woman Christine (seen above) didn’t lose 54 lbs. JUST eating Taco Bell. She even admits she cut back to 1250 calories (too low in my mind, but that’s neither here nor there) and made other “sensible” choices.

As in … maybe she stopped eating burgers and fries, started working out, cut back on sugar, stopped eating her feelings, who knows … but nowhere in the ad campaign does it say she lost it all eating Taco Bell … so it’s very misleading advertising until you read the fine print, which most people don’t.

I have no problem with food venues trying to encourage healthier eating, and maybe those seven “incredible options” really are amazing … but please, please, please don’t call it a “diet,” Taco Bell.

Call it a lighter menu if you will, but calling it a “Drive-Thru Diet” just showcases everything that is wrong with America today. All you’re doing is masking the problem that generously pads your own bottom line (i.e., Americans rely on cheap fast food and are suckers for a deal).

How about you? What do you think about this campaign?