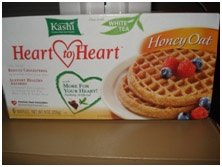 One of the premises of intuitive eating is eating what you really want, instead of what you think you “should” have.

The rationale is if you eat what you’re truly craving, you’ll do it in moderation and won’t overeat mindlessly because you’re giving your body what it really wants.

For example if I am craving, let’s say, chocolate and I try to quell my hunger (emotional or physical) with pudding, I’ll end up eating the pudding and the chocolate and probably some peanut butter too, for good measure.

Which means way more calories than had I just had the taste of chocolate and enjoyed it.

I see you nodding your head … Been there, done that? 😉 You’re not alone. Women are notorious for depriving ourselves of one thing only to end up binging on something else, instead of just listening to what we really wanted (if food was the actual craving in the first place).

So last night I got home late following a Lia Sophia jewelry party (which went well — new catalog! BTW: I can do online orders and ship anywhere; e-mail me if you’re interested — August special is Buy 2, get 2 at 50% off — discount off the most $$ items).

Anyhoo … I was really hungry, and my husband had already eaten leftovers so I had a fridge and freezer of possibilities at my disposal.

I was hungry for something, but didn’t know quite what.

Then I remembered the Kashi Honey Oat waffles I had stuffed at the bottom of the freezer. After the stressful day I’d had, they sounded heavenly … and oh, were they ever! (with some PB Loco peanut butter!!)

It wasn’t a balanced meal by any stretch of the imagination — I could have made it balanced by adding fruit, milk or  yogurt) but I was lazy and tired. Yet I was OK with that because I’d eaten well-balanced meals during the day.

The truth is, it was exactly what my body wanted at the moment. Sometimes we just want a bowl of cereal. Sometimes we want waffles. And sometimes just listening to those cravings actually serves a greater purpose.

Not surprisingly, eating what I wanted kept me from noshing mindlessly at night.

While I wouldn’t consider waffles a proper “dinner” most nights (ok, when I lived alone, maybe!), for last night, it was just fine. And I’m A-OK with that.

How about you? Do you struggle with eating what you want vs. what you think you should have? How are you doing with intuitive eating?

9 thoughts on “When Only Waffles Will Do”